Water can end up in your home either through the Australian storms or an overlooked blocked drain that resulted in a pipe burst. This won’t be much of an issue as we have restoration services equipped with the latest technology, equipment and methods that would minimise the Water damage Melbourne around. The real issue to stress over is the MOULD. It is a nightmare that every homeowner want to keep at bay.

The right way to ensure mould does not grow after water damage is to undertake these steps.

When your home is flooded with water, you will dry the home without a doubt. But just drying the home is not enough. There would be traces of water left somewhere in the water affected area, especially in the spaces crawlspaces. If you do not keep a close watch on it, this is where the mould growth starts. Over time with the increasing amount of mould spores, this increases to a level where you would require professional help to get control over it.

The best way to hunt the presence of mould growth is by its musty smell. This peculiar smell could hardly be masked for a prolonged period, even by the room freshers.

One of the crucial requirements for the mould to grow is the exposure of humidity in a place for a prolonged period of time. The presence of humidity in the home is useless. It is not because the weather could be tackled by creating airflow in the house. The simplest way to do it is by opening the window and switching on the fan. As the air flows through the house, it would get rid of the humidity from the homes bring in the fresh air. This would cut off the initial process of mould growth.

When you create the airflow, but the humidity is in the weather, you would sure let the fresh air in but humidity too. The only way to reduce the amount of humidity in indoor air is by installing a dehumidifier. It dries out the air eliminating, reducing the indoor humidity and also drying out the traces of water that may have been left in the affected area.

Given the recent need of increasing the hygiene against viruses, one thing that you must incorporate in water damage restoration is sanitisation and disinfecting the surfaces. This way, even if the water was contaminated, the water damaged area would not make you and your loved ones sick.

It is quite obvious that you would not have in-depth knowledge regarding how to keep the mould at bay, especially with a high amount of recent water damage in your home. Ask our professional for guidance regarding prolonged care against mould growth. They would provide you with tips and tricks to keep the mould at bay. They even have the knowledge of DIY methods that you can apply if you detect the slightest mould growth in the home. Apart from it, we provide top-notch Water damage Melbourne around such that we would not leave any chance for mould growth after restoration.

What to do and What not to do in Instance of Water Damages?

The Worst Water Damage You Can Ignore In Your Home

How to Take Care of Your House from Water Especially After a Flood Occurrence? 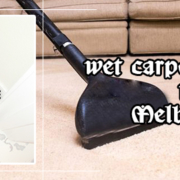 What are Water Damage Mistakes Homeowners Often Cause Further Damage?
Water Damaged Carpet: How to Save and Restore It?

Why is it necessary to hire a professional to clean wet carpets?
Scroll to top